Hey beautiful people, and happy Bachelorette watching! To be honest, I wasn’t sure if I was actually going to follow through with writing a recap, but when I turned on my TV, Rachel Lindsay, the former bach, was on Access Hollywood and I took it as a sign that I just HAD to write a live reaction. With me is some fantabulous $5.99 bachelorette branded rosé… this should be fun 😏 let’s get this party started!

Currently watching the preview narrated by Chris Harrison and wow, here comes that word “disingenuine” (which BTW is not a word!). Now I’ve only been a bachelor nation member since Nick Viall’s season, but did they get in a paid contract with someone to use this word, disingenuine, at least 50 times a season?! I swear it must be their word of the day.

Ugh Jason… the ultimate BAE of the season and my pick for Bachelor 2019. He just seems so funny, relatable and like a genuine dude. I think I knew I loved him and Wills when they burst out laughing at some back and forth nonsense between flat-earther Lincoln and rage-machine Chris… 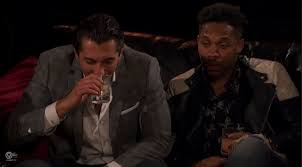 Speaking of Lincoln, is ANYONE going to mention him? Or apologize to America and Becca for making us endure his antics?!

Ok, that preview made me excited for BiP, but at the same time so frustrated knowing that I’m gonna be dedicating hours of my life to people like Krystal, Jordan, David and Ronnie… blegh.

Jake who? JOHN! Did y’all know that this man is worth $5 million?! I bet if Becca knew, his story would have turned out a lil different (not that I approve of marrying for money… but I don’t disapprove of it either #sorrynotsorry). When the season premiered I saw this meme comparing Chris to Chandler’s crazy roommate, Eddie, and now that’s all I see when I look at Chris. Both their on camera personas are pretty much the same as well, but instead of Chris freaking out over a goldfish cracker, he freaked out ABOUT LITERALLY EVERYTHING ELSE.

Chris, your explanation for your behavior has red flags all over it. You sound like a 30 year old man baby and I would be scared to date you ¯\_(ツ)_/¯

Woah Jean Blanc… you’re already in the hot seat then you go after baby Colton’s virginity? While it was a clever comeback suitable for back-and-forth roasting between best bros, making fun of someone’s virginity, especially someone you barely know,  is NEVER ok!

Wow, this battle between Christian and Jordan is one I could have lived my whole life without witnessing and still be OK. I feel like Jordan’s past lovers should make a support group after this season and BiP air just to be there for each other #RegretsOfModelProportions.

Grocer Joe looks better now than he did on the show. The longer hair looks way cool and wow his teeth are perfect! A little big, but perfect. Hes so awkward and cute, I get the hype now.

I love Wills! Not just for his fashion but for his personality, and because of my love for him, I have a strong distaste for Tia and Colton. They robbed Wills of a hometown! He’s just the sweetest and I truly think that if he didn’t look like he just rolled a fat one all the time, me may have been a bach contender.

Colton looks like something Gepetto manufactured in his toy shop. He’s so hot that it’s become creepy how perfect he looks. It’s also super funny how much Becca just wanted to bang him but most likely didn’t want the weight of being the girl he has his first time with. Makes sense. It’s OK, I’m confident in saying 95% of the women watching this season want his d.

David’s eyebrows are sooo long. How did I never notice this before?!

That Bachelor in Paradise commercial with the crabs is hands down the most entertaining thing that’s been shown during this whole episode.

JASON FOR THE BACHELOR! Tbt to when Beccster forgot his name. Her. Loss. I just want to wipe Jason’s tears from his face. He’s so sweet. I just really hope ABC listens to us and gives us the man we want instead of pulling some rando 5 year alumni THAT SUCKED. I’m in a v committed relationship, but I can’t help but wonder what it’d be like to kiss Jason since that’s the most consistent thing Becca can say about him… HE NEEDS LOVE. I LOVE YOU!.. sorry Lucas.

I think Becca’s stylist finally saw all the tweets and comments of disdain toward her sparkly and metallic outfits, cause she’s finally in something that makes her look SMOKINNN. This is a great fit. I approve.

“The world is not flat.” -Chris Harrison

Tbh they really need to have this kind of comedy during the actual show.

And 2 hours later, this show leaves me feeling unfulfilled, yet again! But of course, you can catch me on my bed next week for the THREE hour finale!

Who will Becca pick? The 29 year-old boy that has most likely cried himself to sleep every night since landing at the mansion? Or the dude whose social media history would have probably kept him from being cast on the show? Those are ABC exec, Rob Mills’, words! Not mine! Tune in next week to find out!

There was an error retrieving images from Instagram. An attempt will be remade in a few minutes.